Do Healthcare Providers Have the Right to Judge Us by Our Weight?

I'm speaking on appearance alone and not verifiable data that may be used to diagnose a potential problem.  While all of us have the right to live the best life possible, sometimes we have to wonder why healthcare workers have the need to be so callous and judgemental.  We know our bodies aren't perfect and it seems that recognizable celebrities like Valerie Bertinelli have been on the receiving end of criticism as well. 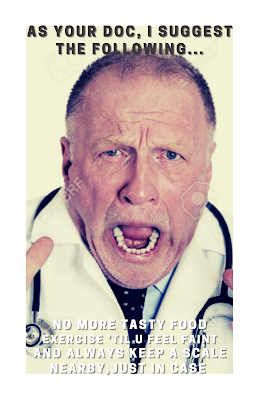 Ms. Bertinelli's account via social media is that an asthma specialist told her to lose weight if she wanted to get pregnant.  This was many years ago when she was married to late rocker Eddie Van Halen and also many pounds ago...all one hundred twenty-six of them.  Body shaming by a licensed professional is not the same as being shamed by some random anorexic methhead named Logan.  We've been programmed to take advice from the former to heart from the time we began visiting the pediatrician.

However, times have changed and we (as in both parties) need to come to a happy medium...and reality.  One fact that remains is that many of us were taught to have unhealthy eating habits and sit in front of a screen for hours at a time.  While my childhood was far from perfect, one thing I do remember is being able to go outside for a few hours after doing homework.  The L.A. smog was brutal back then but I know I'd be a complete mess if I were restricted to sitting by a computer or TV (because the pandemic is killing me now y'all...seriously, let's knock this thing out once and for all).

Today, my current condition is not great but I'm open to the fact that I may need to change some things for good.  During my second bout of chemo, certain foods had a strange smell and I seemed to spend more time in the bathroom than before.  Gorging on veggies, the Paleo diet, or running myself ragged trying to get fit isn't the answer...not by itself, at least.

Truly acknowledging one's body and the problems it may present in the future can be scary, as some chronic ailments like high blood pressure have almost no symptoms.  Currently, our culture is in a body positivity movement that's run amuck like a small kid with hyperactivity issues.  We love the big ladies when they fix themselves up and they're posing like that boss on IG until we hear the wheezing when they speak.  That's not fly but a potential trip to the ER...and the patient is under 40 but consumes more than 3,000 calories daily.

And then there's the foodie thing.  Yay, more food we shouldn't eat, less food that's high in carbs or more protein-laden edibles, or whatever is in vogue these days.  Hey, I'm all about experimenting but what scares me is portion control.  Have you noticed that in the past decade (maybe two) casual dining restaurants went from serving meals on a regular-sized plate to a platter?  Once I had a co-worker who bragged about getting her husband down from 800 to 600 lbs (and he was only about 6'2) but the challenge was finding a microwave that could fit the large plates they ate from.  Since she wasn't a friend, I didn't feel comfortable sharing harsh facts but hope they got the message eventually.

Unfortunately, this isn't a great time for exercise unless you have a home set up.  Resistance bands and small (10lbs<=) dumbells are not only good for those seeking a low-impact workout but don't take up much space.  Otherwise, gyms with limited attendance and public spaces can still be chancy when it comes to walking or running.

What Docs Can Do

I barely have a college education and named three major factors as to why people may be carrying around more weight than needed.  Others may include emotional trauma, stress, or even medication.  Even when we get surgeries non-related to weight, sometimes it can take a minute to fully recover.

So why do physicians, specialists, and even nurses get diarrhea of the mouth when addressing someone's obvious weight issue?

Are they overworked? Stressed? Love to stereotype or hate on those who may be vulnerable?  Or is it the same ol' bully mentality where certain types smell weakness and assume that person is weak for food? Whatever the reason, it has to stop because we have more people who are leaning towards being morbidly obese.  Many say that body-shaming is the trigger that led them into the vicious cycle of food abuse.

Most overweight people have the power to make a change, even if it's minor or they find themselves starting over when they should be reaching milestones.  Like anything else, if you're truthful with yourself and not idolizing public figures, you can move ahead.
consumer cosmetics exercise fitness health weight loss